I posted this directly to  Reddit /r/feedthebeast six months ago. I am re-posting it here to give it a more permanent home, and a bit more explanation.

A mob grinder is commonly used to provide a supply of items which are only dropped by mobs. This includes gunpowder from creepers, bones from skeletons, string from spiders, ender pearls from endermen, and so on.

A highly productive, compact mob grinder can be made with Extra Utilities Cursed Earth and the MineFactory Reloaded Grinder machine. The Cursed Earth spawns large numbers of mobs on top of itself, and the Grinder machine quickly kills the mobs and collects the items they drop. 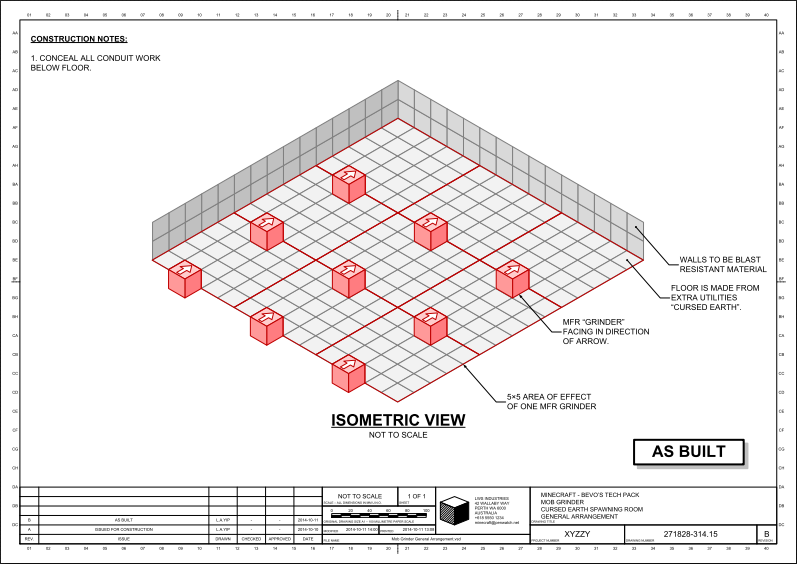 Apart from the main outputs of gunpowder, string, bones, etc. a mob grinder also produces a number of byproducts. These byproducts include gold armour, iron armour, chain armour, and iron tools, all with random damage/durability.

These damaged items are not very useful to a player, who likely has superior armour and equipment already. However, the items can be recycled for raw materials. Gold armour drops from zombies are particularly common and represent an easy source of infinite gold.

The block diagram below shows the detailed design of a system that recycles the armour and tools into raw metal. 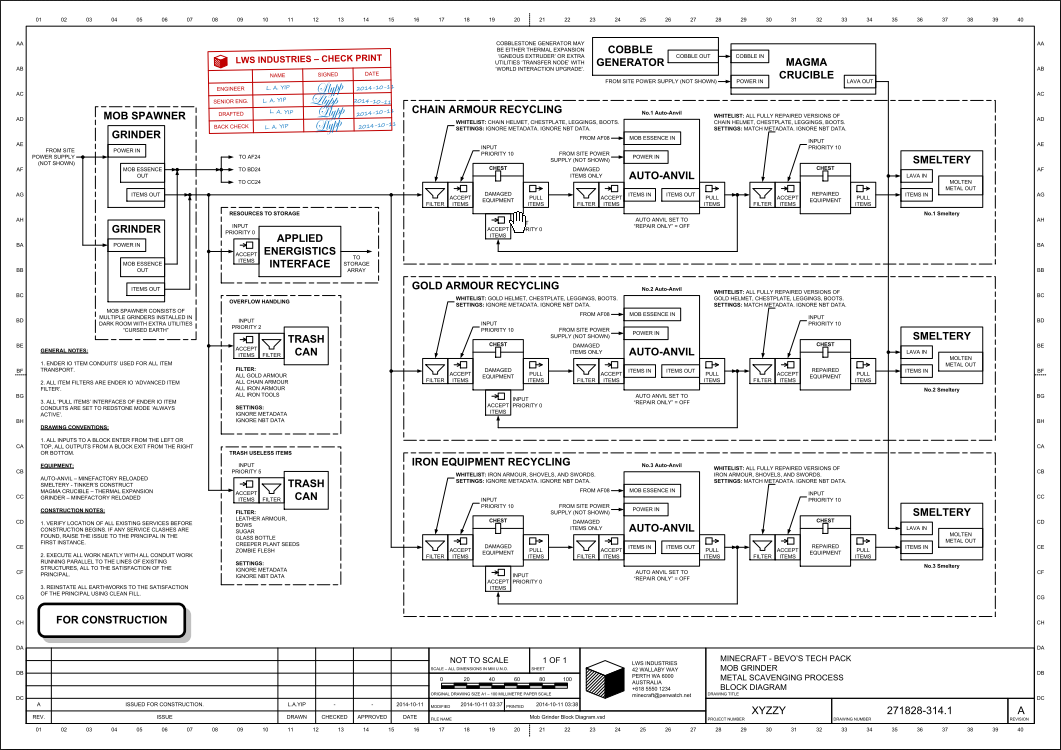 The diagram is done in the style of a serious engineering design drawing, inspired by process flow diagrams (PFDs) and piping & instrumentation diagrams (P&IDs). At the time I drew this, I was employed in the design of a wastewater treatment plant (sewage plant) and had many such drawings on my desk.

There are a lot of subtle jokes included - some mathematics jokes, some pop culture references, and a lot of piss-takes of real engineering drawings which will only be funny to other engineers.

Bonus: To see how the ‘general arrangement’ was drawn in isometric view, see this other post.

For the next in this series of articles on Minecraft, see Applied Energistics 2 - Storage Expansion Designs.

Second, seconding the consolidated smeltery. It’s a trick often seen in skyblock maps – filtered fluid conduits drawing out specific molten metals into casting tables, with item conduits drawing completed ingots off the casting table and into storage. You have to be careful that you’re not putting metals that will alloy into the same smelter, but all told it’s pleasantly efficient, especially for continuous operation.

Previous: How to draw isometric voxels