There’s a (small) Reddit community r/infinitode for the game, where some tips, tricks, and information are exchanged.

Some of those tips and tricks, and my own experiences, are given below.

The air tower has a chance to apply the “burning” effect on each mob it hits.

The “burning” effect is like poison - it does damage over time.

The “burning” effect is very strong, because the damage is a percentage of total hit points. So an air tower can kill air units very quickly, even if they have a lot of hit points!

Freeze towers help by slowing enemies down, so towers can get more shots at them before they move out of range.

Freeze towers also increase the damage of area-effect towers, like the cannon and missile towers, by reducing the distance between mobs.

If there are multiple freeze towers on a single mob, the freezing percentage does not stack, but the rate of freezing does.

Question 2: Do Freeze Towers stack their Freezing % or do they work like the Venom Towers where every additional debuff after the first does 50% of its value?

The splash tower shoots projectiles in all directions.

Essentially, the higher the (accuracy) percent, the more likely the next shots will be aimed precisely in the paths to hit the enemy it’s aiming at. Source

Splash towers get bonus damage against fast (yellow triangle) and light (blue diamond) enemies, which take reduced damage from other common towers. They are very good when placed inside turns, so they can cover more of the path. Combine with freeze and stun towers to increase the number of hits.

Mobs can be hit by multiple venom effects at the same time.

The strength and duration of each venom effect is tracked separately.

Mobs become resistant to the stun effect. A mob which has been stunned once will be hard to stun again.

It’s not clear how stun resistance works, i.e. if the resistance fades with time, or if using more than one stun tower would help.

The bonus mob is a yellow, star-shaped mob.

The bonus mob is resistant to most towers, taking only 2% damage.

The weakness is randomly picked from the five towers you have built the least. (It’s not clear if this is counted by number of towers, or value of towers.)

You should set some of your towers to “Weak” or “Random” targetting, so the towers don’t focus on the bonus mob.

Statement 1: the “special” enemy added in the previous update tend to ruin many peoples great games because towers always focus them regardless of wether they are set to First, Strong, Weak or Random.

Answer: Bonus enemies have many HP points so “weak” or “random” aim strategy will make it possible to kill other enemies. Bonus enemies give many coins / restore health / give many green papers / unlock random Global Upgrade for free, so their presence is worth it.

You can buy global upgrades from the main menu, under “Upgrades”.

Upgrades are bought using “green papers”, which are awarded for reaching certain numbers of waves, and at the end of each game.

Upgrades available for all types of tower:

Upgrades available for most types of tower:

Upgrades to things that aren’t towers:

The bonuses from global upgrades are not explained well.

Firstly, the bonuses scale with tower upgrades; so the bonuses are actually better than they first appear.

Secondly, the bonuses do not stack.

Some data collected in-game is tabulated below. 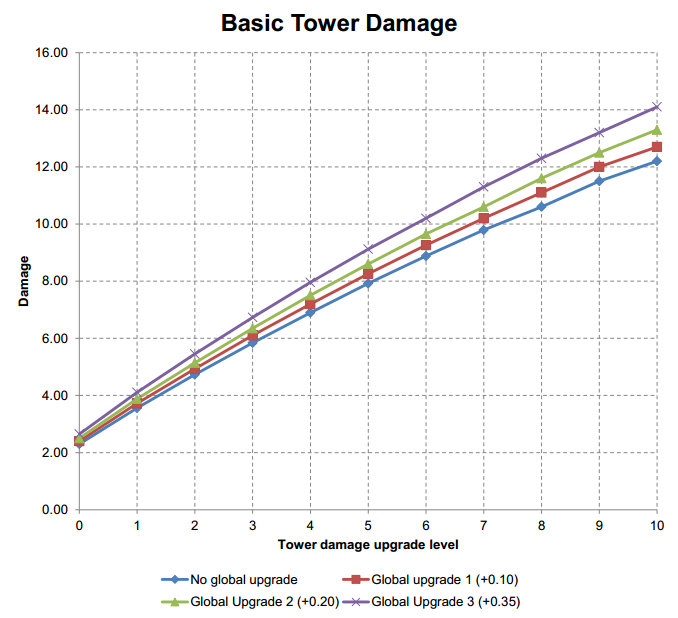 Custom maps should be designed so towers can hit multiple sections of the track - i.e. the beginning, middle, and end of the track.

It also helps if the track incorporates lots of bends and turns. This lets towers cover more of the track. It particularly helps the effectiveness of area-effect towers like the freeze, blast, and splash towers.

One way to do this is to build a space-filling curve, such as the Hilbert curve.