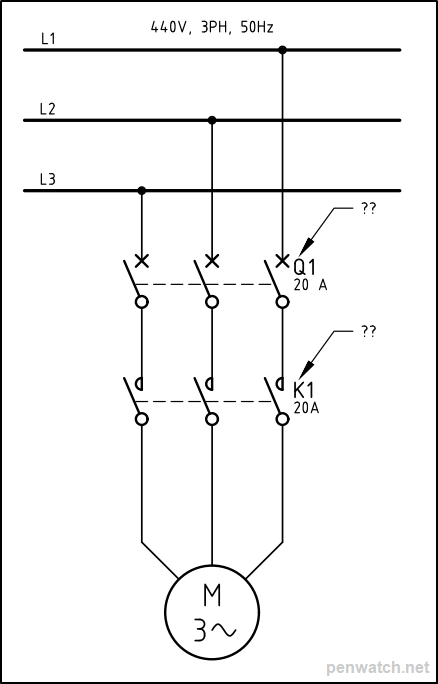 The prefixes ‘K’ and ‘Q’ are from standards about ‘item designation’.

This is a rare case of European standards agreeing with American standards!

I haven’t found any reason why the letter ‘K’ was used in particular. I had guessed the letter ‘K’ was assigned by a German-speaker who pronounced ‘relay coil’ as ‘koil’, and ‘contactor’ as ‘kontaktor’. Unfortunately, ‘relay coil’ translates to ‘relaisspule’ and ‘contactor’ translates to ‘schütz’. Neither of those words start with ‘K’, which sinks my theory.

Similarly, circuit breakers are called ‘Q’ because IEC 60750 says so.

IEEE 315 doesn’t agree with the use of ‘Q’ - the IEEE standard calls circuit breakers ‘CB’, which is arguably a more logical choice.

There are standardised “Letter codes for the designation of kind of item”.

In Australia, we use letter codes based on AS 3702, “Item designation in electrotechnology”. AS 3702 is essentially IEC 60750 with some extra information in the appendices.

Most of the letter codes are fairly intuitive.

Other letter codes are less intuitive.

There are also some strange interactions between over-lapping groups. For example, lamps are generally designated “E” for miscellaneous items. However, LEDs are both a lamp and a semiconductor, so AS 3702 Table 2, Alphabetical list of items and their letter codes, puts LEDs under letter code “V” for semi-conductors.

It appears that the later standards, IEC 61346 and then IEC 81346, attempted to make the letter codes more general. There is still some fuzzy overlap between categories. For example, IEC 81346 uses letter ‘E’ for anything that “provides radiant or thermal energy”, which includes lamps, or ‘P’ for devices which ‘present information’, like indication lamps or LEDs.

The other aspect of IEC 81346 is that it tries to cover both mechanical/fluid items and electrical items. This generalization means some of the electrical-only code letters have changed meaning, or been removed entirely. For example, inductors are now grouped into letter ‘R’ with resistors, and ‘L’ is no longer used for anything.